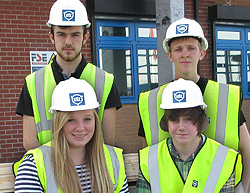 Anna Harrison is making engineering history this week as the youngest female apprentice to be taken onto a ground-breaking business partnership scheme with George Utz UK and Toyota. The 16-year-old is the only young woman out of 25 apprentices to be accepted onto the scheme with the global car manufacturer out of an applicant pool of more than 2000 young hopefuls.

Anna, a former pupil at William Allitt Secondary in Derbyshire, is one of four apprentices taken on by George Utz UK, a global manufacturer of multi-use plastic containers and one of the successful partnership companies working with Toyota, which has extended a collaborative hand to local businesses in a unique scheme to train the engineering apprentices of tomorrow.

She has been joined at George Utz by 18-year-old Kane McDaniel from Eastwood, Connor Berisford, 20, of Heanor and Daniel Milner of Chaddesden, all of whom joined George Utz through the Toyota programme that won the 2014 Semta Skills Award for Skills Innovation of the Year. The Swiss-owned company which employs 49 people - and includes Toyota as one of its key customers - plans to more than double its turnover by 2020 and work on a £3.5 million extension to its manufacturing site will be completed by December. The new apprentices are the first intake of new employees at the company which plans to create a further 40 jobs at its Alfreton manufacturing plant in the next six years.

Anna, who has wanted to be an engineer since she was a small girl, said: "This is like a dream come true, especially as many of my family already work for Toyota. I was always helping my uncle in the garage working on cars - it is what I have wanted to do since I was about six", she added.

Garry Archer, Production Manager at George Utz who will manage the apprenticeship scheme for George Utz, said: "We originally were only going to take on two apprentices, but we have doubled that intake and we are also taking on some of the other applicants who applied to the Toyota scheme. They showed real flare and initiative and will help form an important part of our company growth moving forward. We have an ambitious expansion strategy for the business and this requires us to grow and develop our people through apprenticeships that not only pass on traditional skills such as tool making and machine setting but also allow and encourage them to think outside of the box. Existing apprentices going through the scheme are already demonstrating this confidence."

"The apprenticeships are aimed at not only developing their skills, but also their characters and personalities so that they are encouraged to be proactive and forward-thinking, and confident enough to challenge the status quo. They will then spend most of their time training at Toyota and the only difference will be is that they will have a George Utz logo on their work wear. We are likely to only see than for seven weeks in the next two years. After that time, they will be full time at George Utz with continuous assessment by Toyota and the programme administrators. After completing their four year apprenticeship they will be integrated into production as fully developed and highly trained technicians who will be a critical part of the future of our business and growth strategy for 2020", he added.

Anna ticks all of the boxes as new engineering apprentice at Utz UK | George Utz Ltd.